If you’ve ever had the pleasure of eating a Hail Merry macaroon, you’ll know what heaven has to taste like. I don’t care what St. Brigid said when she thought that all of heaven had to be a great lake of beer – she had never tasted these macaroons. So it was only fitting that spending a ton of money for four macaroons wasn’t going to float my boat for a long period of time. I had to figure out how to make them. After a lot of reading and recipe comparing, I finally decided to venture off on my own. The first batch tasted like you were licking a salt lick. No bueno. The second batch was sweet, sweet heaven. And they were gone within 24 hours. All 24 of them. Whoops. My hips hate me.

They’re not officially “raw” since I used maple syrup – which isn’t raw in case you were ever wondering. It has to be cooked down. However, it’s as close as you’ll come to raw. And they’re still alive and not cooked so you get all of the health benefits of raw honey.

Anyway, I hope you enjoy them as much as my friends and family have! 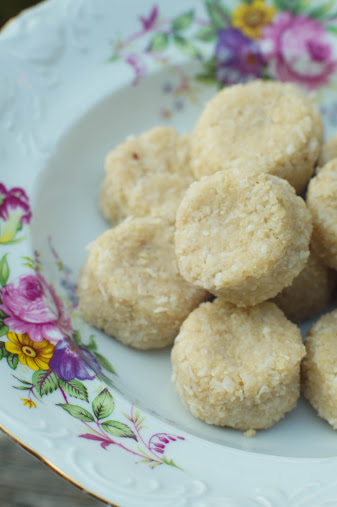